The team of students

The team of students of the Ala-Too International University took part in the first international competition on international law "Dispute Resolution in the Eurasian Economic Union (EAEU)", which was held on November 30-December 03, 2017 in Moscow, Russian Federation.

The event was organized by the Russian State University of Justice, in which participated 12 teams from leading universities from Kyrgyzstan, Russia, Belarus and Moldova.
The purpose of this competition was the formation of a new generation of highly qualified specialists in the field of international law in the countries of the EAEU, capable of representing the interests of both states and business entities in international judicial bodies.
The competition was held in Russian language on the Case of 2017 ("The Heart Case") in two stages: the first stage of which was written pre-trial negotiations with the Eurasian Economic Commission, and the second - a lawsuit in the Court of the EAEU.
International Alatoo University was represented by fourth grade students of the Department of Jurisprudence of the Faculty of Economics and Management Akimkanov Marat, Omurova Karima, Zhusubaliev Atantai and Maksutova Nazima. 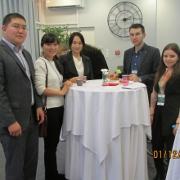